On a sunny fall day a few weeks ago, I hauled my kayak down to the Corp of Engineer’s Calumet Creek (map) access and went for a paddle. It was a nice quiet solo 3 mile round trip with pretty late fall earth tone browns, dark greens, and many falling dry leaves. I saw just a single bright colored tree left hanging over a bend at the creek.

After a sharp bend and under a leaning tree I passed a set of houses. By the look of it, everyone here knows how to fish. Throughout the bend, I would see groups of turtles slipping into the creek off their log perch or mud bank.

Just past here, I paddled under the highway 79 and railroad bridges, through a bottom-land nature reserve, and finally out to the Mississippi River.

I could see 2 river barges, the Lock and Dam #24, the bluffs just north of Clarksville, and the Illinois side. I took in the view, then captured it to share with you.

After a few minutes, I turned around and paddled back the way I came. Enjoy…

This evening the American Queen passed through Clarksville and I collected a few pictures. She’s the largest steamboat ever built.

Here’s a link to her schedule (PDF) and a few of her upcoming trips through Clarksville. Call the Lock & Dam to get a lock through schedule:

Thank you, Margie Greenwell, for the pictures through the Clarksville Lock and Dam! I got into town late and had to catch her at Port Marmec.

Join us for an opening ceremony and talk 2 p.m. July 29 in the Museum Gallery auditorium with Joan Stack, curator of art collections for the SHSM. Stack will discuss Benton’s challenges in illustrating The Adventures of Tom Sawyer, Adventures of Huckleberry Finn and Life on the Mississippi. 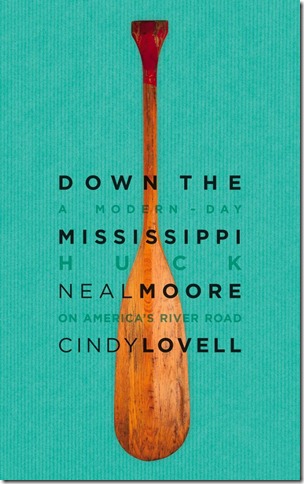 In “Down the Mississippi: A Modern-day Huck on America’s River Road,” CNN iReporter Neal Moore traveled the Mississippi River by canoe and collected positive stories along the way.

Community members can learn more about “Down the Mississippi” and Moore’s experiences in Hannibal during the upcoming book talk at 2 p.m. July 28 at the Mark Twain Museum.

Moore highlights Hannibal in a chapter titled, “The Renaissance of America’s Hometown” and features several community members he met during his stay in 2009, including Fresh Ayers owner Steve Ayers, Dubach Inn owners Kristine and Steve Russell, Bob Yapp of Preservation Resources, Inc. and Alex Addison and Paige Cummins, the official Tom and Becky at that time.

After meeting Mark Twain Museum executive director Cindy Lovell, the two partnered on the book, Lovell focusing on integrating Twain’s voice throughout the narrative and Moore sharing the experiences of his journey.

“When Neal arrived in Hannibal by canoe we were immediately taken with his story,” Lovell said. “The idea of traveling the river in search of positive stories resonated with us, and he instantly became an honorary Hannibalian.”

During the book talk, Moore will share some of the river stories he gathered, and the two will discuss their collaboration on the project, which includes 14 additional chapters about other stops Moore made along the river including a visit to “The Farm” at Angola, La., the nation’s largest maximum security prison.

Moore, a self-described citizen journalist and creative activist, was inspired to make the journey in the spirit of the late Dan Eldon, a photojournalist killed in Mogadishu. Kathy Eldon, Dan’s mother, wrote the preface for the book. James Peipert, a retired journalist, editor and foreign correspondent for the Associated Press, wrote the introduction.

“I’m so looking forward to a good, healthy dose of Americana, to stepping back into Hannibal and for the chance of a lifetime to present ‘Down the Mississippi’ at the Mark Twain Museum,” Moore said.

On May 1, 2012, City of Quincy and FFP Project 109, LLC filed preliminary permit applications pursuant to section 4(f) of the Federal Power Act proposing to study the feasibility of a hydropower project, to be located at the existing Mississippi River Lock and Dam No. 24 on the Mississippi River, near the city of Clarksville in Pike County, Missouri and Calhoun County, Illinois. City of Quincy’s application is for a successive preliminary permit. Mississippi River Lock and Dam No. 24 is owned by the United States government and operated by the United States Army Corps of Engineers. The sole purpose of a preliminary permit, if issued, is to grant the permit holder priority to file a license application during the permit term. A preliminary permit does not authorize the permit holder to perform any land-disturbing activities or otherwise enter upon lands or waters owned by others without the owner’s express permission….. Read More.